Thank you for your patience while we retrieve your images.

This bonsai has the distinction of being the FIRST one donated to T.T.S.B.E.
The bonsai was part of the collection of the late George Gray of Dallas, Texas. It was willed to Reverend Hern when George died in 1995. The tree was styled in 1957 as a root over rock by Connie Dederian, head of the Arnold Arboretum Bonsai Display in Massachusetts. George bought the tree [no record of the date] and trained it for the next 15 - 20 years. In a February 18, 2001 workshop, Nick Lenz changed the front and "Cut off one major branch & some trimming." At some point the tree developed a long split like, hollow area in the trunk. [This area has nearly healed leaving only a small hollow area.] Tree is estimated to be 59 years old in 2013.
© The Texas State Bonsai Exhibit, Inc. 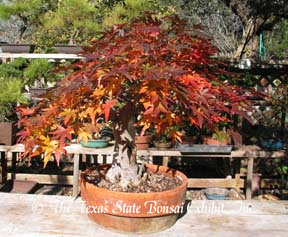